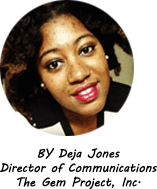 Hundreds of women, young and old gather in Centennial Hall at the Newark Public Library in NJ to have their voices heard at the 2nd Annual State of the 21st Century Black Woman Empowerment Conference hosted by the Beta Alpha Omega chapter of Alpha Kappa Alpha Sorority, Incorporated. The conference was held in the form of a panel discussion with topics that covered issues such as global poverty & economic injustice, education, healthcare, and human trafficking which reign supreme in many urban communities across the globe.

After the introductions and opening remarks were made, the first panelist to present was Tracey Rangie, Health Specialist for Region II of the U.S. Department of Health and Human Services. Rangie’s presentation focused on the Affordable Healthcare Act and getting families and individuals signed up. In terms of the urban communities, specifically ones similar to Newark, NJ many families or people cannot afford healthcare. Rangie, took attendees through the steps of completing the healthcare application process so that women can leave with the proper tools to education those in their communities. As of now families and individuals must be enrolled in the healthcare plan by the 31st of March.

The second panelist to present was Dr. Deborah Davis-Terrell, former interim superintendent of Newark Public Schools. As Dr. Davis-Terrell approached the podium, the round of applause for the previous speaker silenced.

As women attendees nodded in agreement, Dr. Davis-Terrell went on to discuss a major issues that is weighing heavily on urban education: there are not enough community members invested in the education of the children of our communities. Dr. Davis Terrell then makes some very valid arguments in her contrasting of education in the 90’s versus education of today. A part of the problem is that children no longer have the desire to learn. The level of importance of education in our urban communities have significantly decreased and parents seem to send their children to school not to be educated, but because it’s the right thing to do.

During Dr. Davis-Terrell’s presentation, she merges to relationship between poverty and education. Parents are not able to be enforcers of education at home due to working late hours to ensure that their family survives which in turn leaves students with no desire to learn or apply what they have learned in school to life outside of school.

More of Dr. Davis-Terrell’s presentation address whether the NewarkOne Enrollment process is selling false hope to families in terms of school choice; how online education and learning are creating more of a disconnect between the home and school and ends by stating that parents need to make more of an effort to be involved in their child’s school community.

Dr. Davis-Terrell delivered her presentation in a way that was similar to a preacher delivering a sermon. By the time she concluded her argument, women were on their feet clapping in unison. Her words opened up the platform for the next speaker.

As the crowd of passionate women came to an anticipatory silence, a strong voice from the podium asked, “By a show of hands, who would leap at the idea of being rich?” Women giggled and laughed as hands shot in the air.

The voice was from Saundra Y. Addison-Brito, a human rights, social justice, and community activist who serves in the states of New Jersey, Philadelphia, and New York. Saundra opens up her presentation by taking women viewers on a journey of her childhood. “When I was younger, we were poor, but we didn’t know it…”

Addison-Brito goes on to explain that there used to be a social capital that existed in urban areas that just is not there anymore. “There was a richness in community and culture.”

According to Addison-Brito, the urban community flourished then because we were confined and in being confined the doctors, lawyers, and business owners served as role models and mentors and taught others the tricks of their trade.

“After the civil rights legislature was pasted in the 1960’s, and the Jefferson’s implanted the dream of movin’ on up in us as a culture, we lost something very important, we lost our social richness because we became free to do whatever we wanted.” Addison-Brito passionately says

Before Addison-Brito took her seat, she asked, “Why is there still so much poverty in this land of wealth?”

Attorney General, Tracey Thompson concluded the empowerment conference by educating women on human trafficking and how to identify and what to do when we come into contact with traffickers and women who are victims.

Women left the conference feeling empowered, and inspired to be movers, shakers, and women world changers in their homes, jobs, communities, and globally.

Deja Jones, M.Ed  serves as the Director of Communications  at The Gem Project, Inc. Jones  is  also a youth specialist. She has earned her B.A of Journalism degree at Rutgers University and M.Ed at Liberty University. She resides in New Jersey. Follow her on Twitter at @Simply_Dej.