Video: The Gem Project PSA on autism was filmed by Brown70Films on April 17, 2011 on the Founder’s birthday.
Background: April 2011, the Gem Project set out on a mission to educate at least 80 young children and adults about autism, through their interactive literacy program in one month. The lesson involved a reading from My Brother Charlie, written by Holly Robinson-Peete and Ryan Peete, and included autism quilt building activity.

This had surpassed their goal by educating over 150 students in less than 4 weeks throughout 5 sites in Newark, that they serve. The interactive literacy program is done in schools, libraries, and youth centers. The students attend schools such as Roberto Clemente Charter School, George Washington Carver School, Mills Street Academy, New Horizon Community Charter School, Newark Pre-School Council (on Elizabeth Ave.), and Audrey West Headstart Center.

The Gem Project, Inc. is a nonprofit organization that educates school-age children, youth, and young adults about issues that are affecting them and their community. Through the use of innovative programs and enriching activities, the Gem Project is able to hone the leadership and community organizing skills of our youth and young adults.

Site 1:“Before you say anything, you must stand tall and say your name.”

It was a slight challenge holding a discussion about autism with 86 students who are no older than age 4. We held an interactive reading ( which was age appropriate) and a break out session for a hands on activity, which related to our lesson. At the Gem Project, we believe that all things can be taught if you create a way. All site locations participated in our autism quilt building project.
“When I say Gem, you say project!” I shouted. The children chorused, PROJECT! We had such an incredible time.
More Photos From This Site:(here)

The end result of the quilt making is seen below. Our quilt made the cover of Newark Live last October. 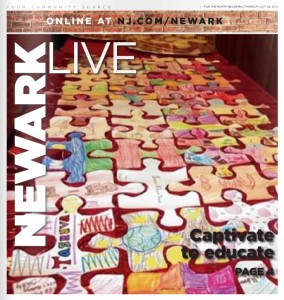 Select students who came from Miller St. Academy and George Washington Carver School attended site #2. The students were divided into two groups, Big Carvers and Gems, for our autism trivia game. Students were rewarded with treats and prizes after the program.
More Photos From This Site:(here)

Site #3 is the first site that we actually enforced a good pledge for our youths to recite the pledge to be a positive leader, a Gem leader. Students did a “cooperative” reading session with the book, “My Brother Charlie,” by Holly Robinson-Peete and Ryan Peete. They also enjoyed the quilt building exercises and enjoyed the treats and prizes, provided by The Gem Project, Inc.
More Photos From This Site:(here)

Site 4:“He remembered what autism was a week later after meeting ELMO!!”

After we did an autism program at site#4 with a group of 3-4 y/o, We were notified by their teacher, Ms. Isler, that one of the students came to her a week later during a field trip talking about autism. He recently turned 5, he met Elmo at a field trip and was questioning his class-mates if Elmo had autism because it appeared that Elmo had a “hard time talking.”
More Photos From This Site:(here)

Site 5:“The Little Gems Beat The Big Gems, Or do they?”

In many situations we like to divide youth by ages to allow our “older” youth be able to have a “teaching” lesson. At site#5, our “BIG GEMS” were in competition with the “Little Gems” when it came to our autism trivia game. When one group answered our questions incorrectly, the other group had a “teaching” moment to identify why the opposing team was wrong.
More Photos From This Site:(here)

Please visit the main website, www.thegemproject.org. This is just a subpage, the TEAM Blog.