Over the next three weeks, I will take you on my own personal journey of becoming an overall healthier person, mind, body and soul. We will explore healthy relationships (romantic or otherwise), habits, and having healthy mental outlooks. I will divulge the lessons that life has taught me and how sometimes you really do just have to learn the hard way, (well in my case anyway).  I will in no way pretend to be the authority on any of the topics discussed. I will merely be sharing my experiences with you. Hopefully, something resonates with you and that you may see a little bit of yourself in me along the way.

Note*: Latishia James is a trained rape crisis counselor and is willing to offer any additional support to any reader who feels they may need it, including resources for local rape crisis centers and hotline.

Lesson 2: The Most Important Relationship You Will Ever Have

“How can you expect anyone to be with you when you can’t even be with yourself ?”

I stared at my mentor with a look of complete and utter exasperation. Once again she had read me my rights and told me exactly what I needed, but had not wanted to hear. I was speechless (a rare occurrence for me) and was forced to sit back in her office sofa and contemplate the lecture she had just so eloquently laid on me. 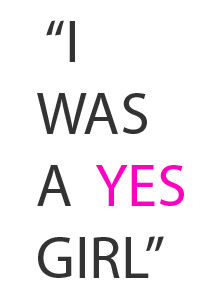 Last week, I gave you a glimpse into my battle with my self-esteem and body image issues, which grew out of a history of sexual assault and exploitation. While I spoke of ultimately growing to love myself and realize my worth, I do not want to give the illusion that it has been a walk in the park or something that I figured out over night. That day, sitting in my mentor’s office, we were having one of our many heart to hearts. On this particular day I had been complaining—whining really, about not being in a relationship. I was explaining to her why I felt I needed to be in one, deserved to be in one, and why it was not fair that other people were and I was not.

I think it would be wise for me to explain that I was a sophomore in college, and had only just begun my healing journey as a survivor of sexual assault. After my hesitation, I began to see a therapist and was working through my Rape Trauma Syndrome (a form of Post Traumatic Stress Disorder). From the outside looking in, anyone would have been able to tell you that I was nowhere near ready to be in a healthy romantic relationship. At the time I did not care if the relationship was healthy, as far as I was concerned– just being able to say I was in one would suffice. I had not yet come to terms with a lot of my past and I still confused someone being interested in me physically and sexually as affection. That day in her office my mentor was trying to tell me, without actually telling me, that I was nowhere ready to be with someone because I had no idea who I was. I had never gotten the chance to know Latishia because up until that point I had only been living to please others and portrayed the Latishia that they wanted. I needed to truly spend time alone and get to know myself if I wanted the cycle of being used by others for their pleasure to cease and to be fulfilled as a person.

After leaving mentor’s office that day, I went back to my dorm room, and mulled over her words to me. As I sat on bed still partially frustrated I opened my journal and attempted to make a list of 1) all the things that I liked about myself and 2) all of the things I enjoyed doing. At the end of my activity I came to two very startling and disheartening realizations: 1) there was not much that I liked about myself and 2) everything I thought I liked to do were actually things that other people liked doing and I had went along with to please them.  I decided then and there to make a change in my life and I embarked on one of the hardest journeys I have ever taken: building a healthy relationship with myself. In this journey I was also able to put some valuable self care lessons into practice. The only way I could stop doing things I did not like, was to turn down the invitations, which led to my first lesson of learning to say no. As a people pleaser, I was a “yes girl” due to my past and my inherent nature I was always concerned with making others happy. I wanted people to like me even if that meant I didn’t like myself in the end, hence, I always said yes. However, as I evolved and developed my relationship with myself saying no became easier and saying yes to myself became paramount. I started going on dates with myself, this was probably the hardest part but I knew it was something I had to do. I would take myself to dinner, to the movies, to the nail salon, basically wherever self said it wanted to go I followed. My first time going to the movies by myself was torturous, I agonized over who I would share jokes with, who I would whisper with, and who I would cry with. In time came all the perks. I got all the popcorn to myself, I could sit where I wanted to without regard for someone else, and I didn’t have to worry about explaining a part of the movie that the other person had missed. Those were not the only benefits that came with treating one’s self, there were a host of others but ultimately the biggest perk came the day I realized that I loved my own company. I discovered this hilarious, quirky, fun, charismatic, laid back, adventurous, blossoming woman whose company I adored being in.

I came to value my “me time” to the point now, that if I do not have it I become cranky.  As individuals, we must know ourselves in such a way that when it comes time to share our life with others, we can do so without sacrificing parts of us and without demanding too much from our partners. Learning to be in a relationship with one’s self is paramount to being in a relationship with anyone else. My mentor was right (as she always tends to be): “How can you expect anyone to be with you when you can’t even be with yourself?”

Latishia James is a sexual health educator and advocate for women and girl’s health and reproductive rights. She currently coordinates programming for sexual health for youth in Washington, D.C. Latishia is passionate about empowering the lives of young women and girls and uses writing, dance and performance as a platform for advocacy and activism. If you would like to book Latishia for a writing, poetry, performance engagement or to teach a Zumba class please feel free to contact her through about.me/latishiaavjames.